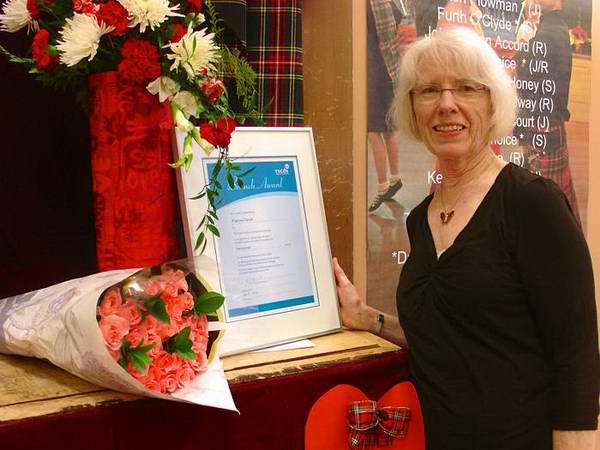 Frances Caruth was presented with a RSCDS Vancouver Branch Award on Saturday, February 16th, at the Tea Dance following the Love to Dance Scottish Workshop, one of the many events which Fran organizes each year. This award recognizes her more than thirty years’ association with and participation in Scottish Country Dancing in Vancouver and beyond.

Fran started Scottish Country Dancing in the 1980’s. She received her full certificate as a teacher in 1999 and was a member of the Branch Demonstration Team for some years.

Fran served as a Vancouver Branch Board member from 2004 to 2012, an eight year term unrivaled in length and dedication to service. During her eight years of serving on the Board, Fran also took on the role of Dancing Coordinator (previously known as Teacher Coordinator). To carry out this challenging job concurrently with her duties as a Board member required a huge personal time commitment.

During her service with the Board, Fran’s exceptional planning and organizing skills led to her serving on several committees and sub-committees, such as: defining/drafting the duties of Board Members, constructing the guidelines for the demonstration team, and the preservation of Branch Archive material, to name but a few.

Now, having finally completed her eight years of service with the Board, Fran still remains as Dancing Coordinator.

Fran’s skills as an organizer are second to none, skills that have been of great benefit to the Branch as well as to the greater dancing community.